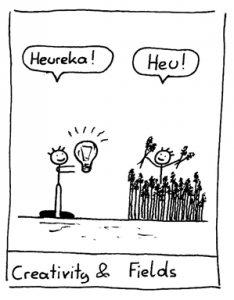 Taking place at the Technical University (TU) Berlin on June 28 and 29 2018, Organized Creativity’s 2nd Annual Conference was at the same time the 2nd International Conference of TU’s Research Training Group “Innovation Society Today” (both sponsored by the German Research Foundation DFG). Thus, a collaboration between to research groups interested in similar, yet probably slightly different phenomena: creativity and innovation. The conference took a perspective towards creativity/innovation discussing them together with the concept of fields. Combining keynote speeches from renowned scholars with presentations of doctoral and post-doctoral research, the conference underlined as well its claim of internationality as the research groups’ goal to foster young scholars’ work. In the following we will give a short recall of the different presentations given.

After an introduction by the spokespersons of the two research groups, Arnold Windeler (Innovation Society Today) and Jörg Sydow (Organized Creativity), Neil Fligstein (UC Berkeley) opened the conference with “Innovation, Practical Knowledge, and the Theory of Fields: How to Make Sense of Financial Innovation”. Drawing on Bourdieu’s field theory, where innovation as a concept plays a rather underrepresented role, he points to fields as strategic action fields that open spaces for innovation.

Georg Fischer (TU) portrayed in his talk “Copyright in Sample-based Music Production” musicians using samples as integral part of their music creations. The creators understand themselves regularly as music archivists, curators or even “sound archaeologists”, thereby pointing to a rather unusual perspective on creation and innovation. He showed convincingly how music actors engage with diverse “workaround”-practices in order to meet the requirements of the legal environment. Thereby the actors frequently demonstrate considerable “workaround”-creativity allowing them to keep on sampling though threatened by legal obstacles.

After lunch, Silviya Svejenova’s (CBS) lecture “The Temporality of Creativity: Organizing for Novelty in Time” engaged with the issue of temporality for organizing creativity. Depicting three interesting contexts – or in temporal language: events – namely fine visual arts, high end cooking and c-suite nomenclature (the “invention” of “chief” positions in organizations) she argued for a more fluid perspective on creation processes as a main goal for further research.

Before a “Schnitzel”-dinner, Birke Otto (Viadrina) reported “Timing Secrecy and Surprise in Idea Generation” and presented the story of a pharmaceutical drug development and how secrecy and withholding information was not only an integral part of the creation process, but also changed the information kept secret itself. Thereby she challenged the typical view on secrets as stable entities once an information is labelled a secret. In her talk she interestingly connected secrecy with surprise, leading to a view on idea generation where abrupt changes from withholding information to intentionally making it public is crucial.

Opening the second day Frank W. Geels (MBS) emphasized the importance of long-term socio-technical transitions and articulated the need for inter-disciplinary frameworks regarding theoretical strands of literature interested in innovation by presenting his paper “Theorising Innovation in Fields with Sociology of Technology, Evolutionary Economics and Neo-institutional Theory”.

Following this theory-laden talk, Ariane Sept (TU) narrated the development “From Slow Food to Cittaslow: Constituting a Field of Slowing Down” and showed how “slowness” became a worldwide social innovation, starting with four small Italian towns in the late 1990’s. The innovation process described here was closely connected to a few distinct actors, the town mayors, regularly reappearing in the narration and the idea of slow as a new option against societal acceleration.

Lukas Vogelgsang (FU/IRS) presented his paper “When nothing is Predefined: Pharmaceutical Development between Organizing and Organized Creativity” that aims at untangling structure and uncertainty. He unfolded a drug’s creation process between a rather output oriented process depicted as “organized creativity” and “organizing creativity” as a process of sense making. Both are necessarily part of the creation process and show a very different handling of creativity.

In the following keynote Kathrine Chen (CUNY) introduced her work on creativity in organizations in the US education system. Calling her talk “Creativizing Organizations and Fields” she delivered insights into her current field work in schools and how these implement “creative practices” into their daily organization.

The closing panel discussion led by David Stark (Columbia) tried not only to wrap up the presented ideas, but furthermore showed underlying dissonances mainly unfolding around the key terms of the two research groups – creativity and innovation. While Gernot Grabher (HCU Hamburg) pleaded for precision and a teasing out of the differences between innovation and creativity, David Stark questioned this “branding” of processes. One key difference, however, might be that creativity is not as much (or not at all?) interested in diffusion processes, while innovation exactly starts at this point. Yet, another claim depicted that innovation could be done without creativity. The opposite might of course as well be possible. In the end, even another of the great questions came up: “What is the new?” with a connected and very interesting side-question referring to idea developments in general and maybe even opening up methodological questions: “How can an idea travel and still be the same?”