Trying to CREATe some Organized Creativity: Impressions from a Research Visitor’s Month in Glasgow

This May I had the opportunity to visit CREATe, the center for copyright and new business models in the creative economy, as a research visitor thanks to the Organized Creativity “Young Scholar Exchange Program”. Getting to know the University of Glasgow and CREATe as probably the most renowned research hub concerned with the intertwining of creative industries and copyright regulation was definitely a great experience and fits perfectly with the interests of our project 1.4. Organizing Creativity under Regulatory Uncertainty: Challenges of Intellectual Property. Investigating creative industries since 2012, CREATe aims for bringing together academia, industry and civil society, with topics ranging from a creator’s perspective interested in process and copyright or questions regarding user generated content and user behavior, to intermediaries, platforms and open business models in the creative eonomy.

Since I am as well in the middle of my dissertation project as in writing working papers for our project, I spent the time in my roof office opposite the beautiful university tower tracing several threads of interest, all of them considerably benefitting from CREATe’s findings making my stay a worthwhile experience. Besides, I was able to do some additional fieldwork in and around Glasgow, getting in contact with the city’s vibrant music community, making a couple of exciting interviews and interesting observations at festivals and concerts.

Considering our project’s general interests, the work of Adam Behr, Keith Negus and John Street referring the music practice of sampling as a continuum of practices (2018) is of great value. The linkage they draw between ethical codes and different music techniques is an aspect I come across frequently. Talking with a Glasgow based music artist who uses found tapes and especially found voices on found tapes as music material, this broader perspective already proved useful.

Quite influential might be the multilayered presentation of some of the Edward Morgan’s Scrapbook pages CREATe analyzed. Stobo et al. (2018) used a very tangible idea of risk perception (high, medium and low) to make possible losses in information visible that come with legal uncertainty. Another anecdote might fit here: an electronic musician from Glasgow told me his first EP originally used two samples, one famous drum rhythm and a female voice taken from a YouTube Video. During studio recording the producer suggested to take out the famous one due to legal uncertainty. The unknown voice sample remained. Besides other aspects, this unfolds the issue of available and non-available outcomes of creative processes and what can and cannot be heard. Depicting music pieces with and without possibly infringing material in a similar, yet audible manner like the Scrapbook pages would be great. 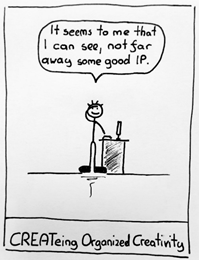 A bit more detailed I want to report on work done for my dissertation project that deals with the creation of soundalikes in music. Generally, soundalikes are a common, often critically evaluated phenomenon in modern, likely popular, music. The main feature of these pieces of music is the similarity of sound they share with another usually famous song. Imitating and for mostly copyright reasons at least partial transforming are practices of importance creating soundalikes. They can be seen as distinct forms of what Negus, Street and Behr call “creative copying” (2017). Creating soundalikes is often connected to remittance work for commercials, which is also one of the two contexts I look at. Focus of my work in Glasgow was, however, a digital platform selling royalty free production music, where soundalikes make up a significant amount of the available songs. During May I gathered material like screenshots and forum-threads online and aimed to analyze the creation and evaluation practices applied on the platform.

There I observe an interplay between aspects of gamification and competition leading to soundalike production. Music producers, typically referred to as “authors”, are ranked in a game like manner. Instead of “kills” the amount of individual sales (note: not the money made) works as the main positional indicator. Additionally, authors can earn a plurality of different badges (I found thirty-six), distinguishing themselves within the community, but also from the perspective of customers. By looking at the “top-sellers” lists with varying temporal scopes one can grasp the pronounced winner-take-all dynamics present. Soundalikes now are often produced in the hope of piggy-backing a fad that from time to time arises around a certain track. Since monetary aspects of music production are very visible, I would argue that the platform produces its own “soundalike-fostering” environment. While now the existence of soundalikes on a production music platform is not too surprising, leniency towards it might be a bit irritating.

In this regard, CREATe’s work on intermediaries was informing me. Especially Hviid, Sanchez and Jacques’ (2017) finding that market power shifts from label or publishers to the retail sector, suits well to the observations I made in Glasgow. Adding to their point, I would note the platforms power to decide what stays and what is banned from it. The official position of the platform considering soundalikes is to foster emulation and to prohibit imitation. This very vague differentiation leads to multiple interpretations of what a soundalike is and when it is evaluated as infringing an author’s copyright. Alleged infringements happen regularly and are also reported (there are even badges for active reporting), some items are then taken off the platform, but others remain. Often these decisions are challenged by the authors, who try to make sense of which legal evaluation practices are in place.

One intriguing argument still in need of further consideration is a platform’s implicit distinction between tracks exclusively on the platform and commercial tracks from charts or movies. Some authors claim that mainly the imitation of the latter is prosecuted strictly. The risk averse platform thus might circumvent parts of the issue by treating music pieces differently. Legal problems can certainly have greater effects if a commercial star takes legal action against the production music platform than if a platform dependent author does so. Relating to the argument of power this leads to the assumption that actors install their own evaluative schemes to what is allowed and what is not allowed, even leading to a situation with two “copyrights”: one for music inside, one for music outside the platform’s universe. This could underline the substantial difficulty of applying copyright evaluation on pieces of music “correctly”, when referring to uncertain concepts and differentiations like the one between emulation and imitation. However, the linkage between copyright and music is full of questions like these. From a broader cultural perspective, the importance of copying for actors as pointed out by Negus, Street and Behr (2017) can be stressed. Actually, the platform and community give the impression of acknowledging the constitutive role copying plays in music creation processes in general, which is a stance not to be taken for granted in the innovation and novelty driven music industry.

Stobo, Victoria, et al. „“I should like you to see them some time” An empirical study of copyright clearance costs in the digitisation of Edwin Morgan’s scrapbooks.“ Journal of Documentation 74.3 (2018): 641-667.