History of the School

The School of Business & Economics (then still known as the Law and Economics Faculty) was among the attendant faculties when, on 4 December 1948, the Freie Universität Berlin was officially founded. A free university originated in the southwest of Berlin, stemming from a protest against the communist-influenced university “Unter den Linden”, which, because of their political beliefs, had withdrawn students’ permission to study. Courageous students and scientists were substantially supported in the founding of their university by the USA and the then mayor of Berlin, Ernst Reuter. 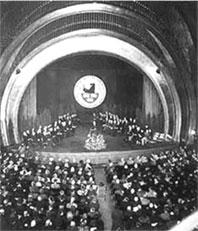 Among the founding professors of our School – initially still the Law and Economics Faculty, then Economics and Social Science Faculty – were Friedrich Bülow (the first dean of the Economics and Social Science Faculty), Albrecht Forstmann, Wilhelm Eich (Auditing and Tax Consultancy) and Andreas Paulsen (Director of the Institute for Economic Theory, from 1955 – 1957 president of the Freie Universität Berlin).

One of the first students in our School was Eberhard Witte. Eberhard Witte later became Erich Kosiol’s assistant, who awarded Witte his doctorate in 1955. Eberhard Witte became one of the most influential representatives of German business studies, because he gave a prominent place to empirical research. He taught at the Universities of Mannheim and Munich (LMU). He has been a professor emeritus since 1996.

In 1969, what had been called the Economic and Social Science Faculty since 1949 became the “School of Business & Economics”. From the very start, our School has been associated with the names of a series of other excellent scientists who have decisively shaped our School (see also emeriti):

Erich Kosiol – Professor for general business studies and organization at the founding of the School – was then director of the Institut für Industrieforschung (Dept. for Industrial Research) and director of the Betriebswirtschaftliche Bibliothek (Business Administration Library). He taught and conducted research at our School from the founding of the FU until his retirement as professor emeritus in 1967. Erich Kosiol counts as one of the legends of German business studies.

Karl-Christian Behrens – from 1950 initially associate professor, then from 1959 full professor for general business administration and trade and market economics in the School. Throughout the 1960s Carl-Christian Behrens decisively shaped marketing research and teaching in the German speaking regions and beyond. He belongs to the founders of scientific marketing research and advertising studies in Germany. He retired as professor emeritus in 1975.

The first German to be awarded the Nobel Prize for economics, Reinhard Selten, worked at the Freie Universität as professor of economics from 1969 – 1972.

Business organization studies became a specialty that has achieved particular importance at our School. The doyen of business organization studies in the German speaking regions was Erich Kosiol. He had a large circle of students who received their academic education at the FU Berlin. Included among them was Erwin Grochla. Erwin Grochla was a student of Erich Kosiol and, from 1951 – 1957, his assistant for the professorship of general business studies, industry and labor economics as well as at the Institut für Industrieforschung (Dept. of Industry Research). He completed his postdoctoral education at the FU Berlin.

In 1953 the sociologist Renate Mayntz obtained her doctorate at our School (then still the Economics and Social Science Faculty). In 1957 she completed her postdoctoral degree here as well. Between 1960 – 1965, she taught in Berlin and achieved the position of associate professor. From 1965 – 1971 Renate Mayntz worked as full professor of sociology at our School, later as professor of organization sociology at the German University of Administrative Sciences in Speyer, then at the University of Köln. She retired as professor emerita in 1997.